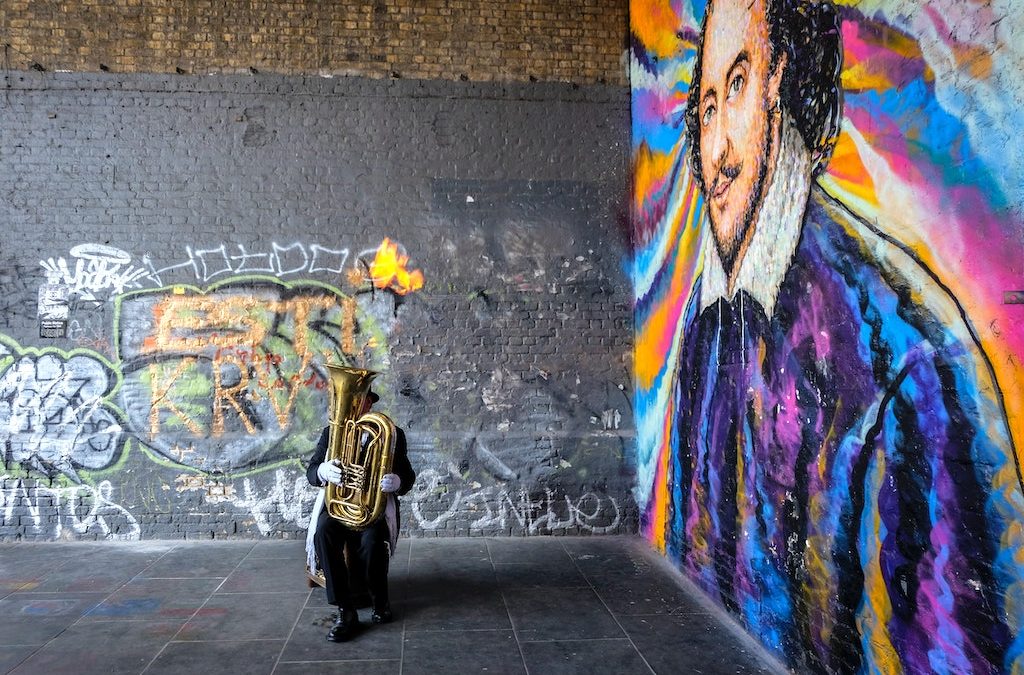 At North Ealing Primary School, the Year 6 production has finally come around the corner, making everyone nervous yet extremely excited. At the Looking Glass, North Ealing’s newspaper, we have decided to interview some of the characters of our show, Shakespeare Rocks!

We will start off with Isla S, who is playing the part of William Shakespeare’s wife.

It will be a bit difficult, and since there is lovey-dovey stuff on page 46, that won’t be helping the situation. Anne, however, is an amazing character and I am happy to play her, she told us.

As we moved on, we found the actor for William Shakespeare, Freddie. He (rather reluctantly) told us,

I’m glad I got the part, but since I have 48 lines, it’s not going to be particularly easy.

He then returned to the football match, and we didn’t hear anything else from him.

After that, we went to interview Zak, who is playing the part of an actor who is playing Macbeth in the play. The other people playing actors think his real life name is also Macbeth, but it ends up being MacDonald.

Mac is a nice character, and I’m happy I ended up with him, Zak commented.

This scene is full of humour and is bound to make everyone laugh.

The play is about Shakespeare’s life and includes people that appeared in his life, going from his children to Her Majesty Queen Elizabeth I. There are a number of songs in the play, making it a musical as well.

The last actor we interviewed was Lana, who plays Nic, the assistant of Burbage.

I’m quite happy. Nic is bossy and noisy. Reminds me a bit of myself really,” she told us.

Our article doesn’t end here though. We managed to get the opinions of the directors. Up first is Miss Lauren Pitt. She told us,

It’s very humorous and has a good link to the arts. It is amusing, witty, historical and memorable. My favourite character has to be Street, mainly because of the cockney accent.

Next up is Mr Lewis Fisher,

The play is full of charisma and humour throughout and is an experience that one wouldn’t want to miss. Burbage is my favourite character since he is relatable and funny.

Our last but not least interviewee is Mrs Sarah Symes, who teaches class 6S.

I really like the fact that it’s Shakespeare and that the characters were all part of his life;” she revealed, “It’s very entertaining and fun for all ages.

It was great to hear everyone’s opinions on the play, and we hope to do so again soon. Stay safe and remember to come back soon for our Eurovision special!

Your reporters were Eleanor and Sara, 6S

This website uses cookies to improve your experience while you navigate through the website. Out of these cookies, the cookies that are categorized as necessary are stored on your browser as they are essential for the working of basic functionalities of the website. We also use third-party cookies that help us analyze and understand how you use this website. These cookies will be stored in your browser only with your consent. You also have the option to opt-out of these cookies. But opting out of some of these cookies may have an effect on your browsing experience.
Necessary Always Enabled
Necessary cookies are absolutely essential for the website to function properly. This category only includes cookies that ensures basic functionalities and security features of the website. These cookies do not store any personal information.
Non-necessary
Any cookies that may not be particularly necessary for the website to function and is used specifically to collect user personal data via analytics, ads, other embedded contents are termed as non-necessary cookies. It is mandatory to procure user consent prior to running these cookies on your website.
SAVE & ACCEPT